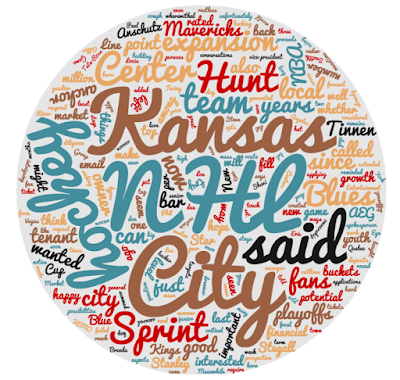 About a year ago, the Kansas City Star's Sam Mellinger wrote some tripe about hockey in Kansas City to cover their yearly quota.  And that's fine, because it's not like they write this same article all the time.  "Kansas City loves hockey" but "Kansas City can't support an NHL team" and it doesn't matter anyway because "the Sprint Center is one of the busiest arenas in the world."  There is some #original #content.  You're lucky I didn't put that behind a pay wall, and act like blogs aren't dying the same slow death as online newspapers.

Anyway, here's another annual hockey article, which is different this year because Vahe Gregorian wrote it.  You will note this is important because we are led to believe he gets paid more than Sam Mellinger or Yael T. Abouhalkah.  The title of this blog post actually should read "KC Star Copy/Pastes last year's article," but there is some newsworthy stuff in here.  But, if this article is too much for you to handle, I made a word cloud of it (above).  You can rest assured it hits all of the high points.

Kansas City Still Not Viable for NHL Expansion, But Still Not for Dumb Reasons

THE KANSAS CITY STAR WROTE A STORY ABOUT HOCKEY!!!

I know, it sounds crazy.  But it's true, right there, on Sam Mellinger's blog.  And the story was only released about a week and a half after Gary Bettman's press conference announcing a new round of NHL expansion.  We're making progress here, folks.  Hockey town Kansas City, here we come!

Of course, there are problems with the logic in the article, so your resident "indignant" Kansas City hockey blog snaps into action!  But we will get to that in a moment.
continue »
Posted by Flubber McGee at 11:33 PM 1 comment:

Bettman said it doesn't mean they will expand but will listen hard to expressions of interest.
— Bob McKenzie (@TSNBobMcKenzie) June 24, 2015

If there's expansion, Bettman said the fee will start with a 5. Therefore, $500M+ for a franchise if expansion proceeds.
— Bob McKenzie (@TSNBobMcKenzie) June 24, 2015

The application process runs July 6th through August 10th, so if you have $500 million just laying around, you could be an NHL team owner!  Put the team in whatever city you want, it doesn't really matter!  Butte, Montana?  Sure!

Of course, this gets the wheels turning for cities like Las Vegas, Seattle, and Quebec City to actually stop waiting around for the Coyotes to inevitably relocate, and have a nice team of their own minus the baggage.  This, to a lesser extent, works as a PR move for the league, detracting people from the Coyotes circus and other franchises with struggling finances and attendance like the Panthers and Hurricanes.  Do not get it confused, though.  The health of all member organizations is certainly not a pre-requisite for expansion.  MLB's Minnesota Twins and Florida Marlins knew that all too well shortly after new franchises in Tampa and Phoenix popped up.  The stability of the league is not Gary Bettman's wish, or strength, as is well documented, so that's not what is at issue.  Expansion is a money grab, and a way for Bettman and the NHL to offset or recoup the losses of the struggling franchises.  It offers nothing in return from the NHL, except you get to put one of its teams in your city.  And you might get to host the draft and an All-Star game eventually.  WHEEEEE!

continue »
Posted by Flubber McGee at 12:41 PM No comments: 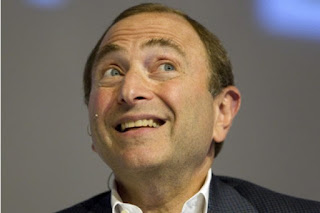 The day is finally here!

Today, Gary Bettman announced the NHL will be accepting applications for expansion franchises from interested markets and ownership groups. I thought I wouldn't see this day for a long time, mostly because Gary Bettman pretty much said this day wasn't coming any time soon.

No matter - this is exciting news! Kansas City can finally get one more crack at having an NHL team! The Sprint Center can finally have that permanent sports tenant we were promised!

... And Kansas City isn't even in the discussion?

Welp, maybe when the Phoenix Arizona Coyotes inevitably have no home to play in we will have another cha- HAHAHA YEAH RIGHT.

Above is a great video posted to YouTube about a year and a half ago of some great Kansas City Scouts footage.  User "JC70" cuts together video from the Scouts playing their first home game against the Chicago Blackhawks, and a mid-season matchup in their final season agains the Minnesota North Stars.  Great job, JC70, and I wish there were more of these videos online.

0:29 – Scouts get a great chance, shoot wide, the puck slides around the boards and turns into a Chicago Blackhawks breakaway. I feel like many Kansas City sports teams have something similar happen all too often...

1:21 – bro loses his stick, picks it up, passes across the crease, and it goes in off of Scouts goalie

3:40 – Scouts out here lookin' like fools, refusing to play defense.

4:56 – The Edmonton Oilers must have used the Scouts as the model of how to play defense. 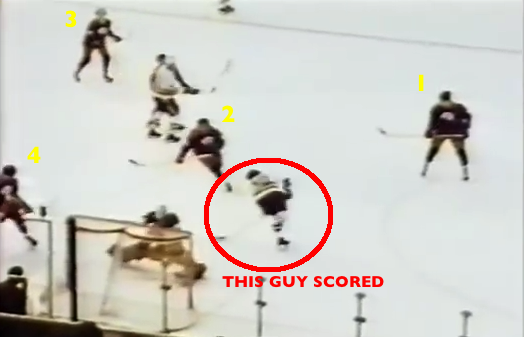 5:20 – Pierre Jarry was a Scouts killer!  One can only assume he would have had a Hall of Fame career if the Scouts stayed in the league.  Alas, his NHL career ended in 1978, after eight seasons.


Posted by Flubber McGee at 2:46 PM No comments:

What Others Are Reading